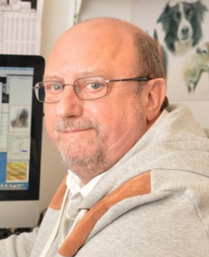 Formally trained as a commercial artist at the London College of Printing (where he later taught as a part-time lecturer in Reprographics) he has always enjoyed using state of the art visualising techniques to produce illustrations.

For most of his career, his forte was producing corporate identities for major international companies. Gerald has been involved with the tremendous transition that the graphics industry has undertaken over recent years, changes that have seen conventional mediums convert to the digital age of computer graphics.

With the wealth of experience he has gained in the graphics industry, he decided to share his skills and in 2000 became a lecturer teaching Computer Aided Art and Design to Graphic students alongside his commercial interests. In recent years, Gerald has released a range of illustrations covering a whole variety of subjects using digital and conventional mediums such as oils, acrylics, pastels and charcoal.