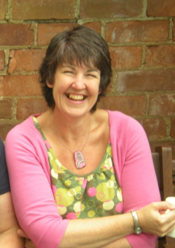 Helen lives near Buntingford, with her husband and two children. She has a scientific rather than an artistic background. After graduating with a BSc Hons in Chemistry from St. Andrews University, she worked as an analytical chemist for over 20 years.

Her interest in glass began about ten years ago, after buying a plate from an artist who ran courses in fusing glass. After that, she was hooked. She moved on to study at the University of Hertfordshire and has been experimenting with fusing and slumping glass ever since. However, approaching the subject as a scientist can have its drawbacks.

In her formal training as a chemist, she strove for consistency and reproducibility but has learnt that this can also lead to frustration, as many of the changes which occur during fusing are unpredictable, so the whole process is a kind of alchemy. This also is what makes it so exciting! 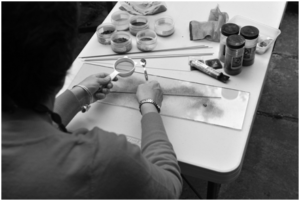 In her work Helen uses inclusions such as metal leaf, metal foils and wire, along with metal oxides, powdered coloured glass and enamels. She is particularly fascinated by how light and reflection can change the colours in her work. Helen draws her inspiration from the natural world such as the movement of water or the flames of an open fire. She is currently producing a collection of work inspired by the plants and seed heads in the surrounding hedgerows.