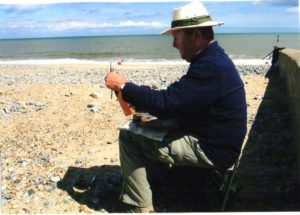 James was born in 1939 and brought up in Hornsey North London. He is, by and large, a self-taught artist in oils and watercolours. James’s interest in art started during his formal schooling at both grammar school and technical college where he also studied technical drawing.

Over the last 20 years, James has pursued his interest more seriously, learning much and gaining inspiration by studying books and the works of artists that he admires such as Turner and Seago amongst others, as well as regularly attending exhibitions by the RSMA and the Wrapping Group.

Spending five years in the merchant navy preceded by a year at nautical college in 1954, which involved training on the River Thames and West India docks, has led him to have a particular interest in marine, coastal and river scenes, and as a consequence he paints mainly, but not exclusively, marine subjects. James has also been a member of the Hertford Art Society since the mid-1990s and has had paintings accepted every year for their open exhibition. He also enters into many art shows. On two occasions in recent years, he has had works accepted by the RSMA.